I know, it’s not a word, but the news in Peauxdunque will not be stopped by the mere limitations of language!

(1) Peauxdunque’s Larry Wormington (editor-in-chief of the Peauxdunque Review), has learned that his short story, “Last Known Tomorrow,” will be published by Redivider. The Boston-based literary magazine has previously published such luminaries as George Singleton and Billy Collins (and Maurice Carlos Ruffin), and Larry’s gives them good company.

(3) And (trumpets, fanfare), Maurice Carlos Ruffin has been named by LSU as an Assistant Professor of Creative Writing! He will begin teaching in LSU’s MFA program this fall. We’re excited for him, and for his future students.

The New Orleans Poetry Festival will take place from April 20 through 23, at the New Orleans Healing Center and Cafe Istanbul (2372 St. Claude Avenue, NOLA), and Peauxdunque poets will be featured among the poets and presenters. (Indeed, unrequited Peauxdunquian Benjamin Morris is a coordinator of the 2017 NOPF).

Kelly Harris will be featured twice during the NOPF. On Friday, April 21, at 3:30 p.m., she will be on the “Mystic Female: Black Women Poets Read” panel, along with Kwoya Fagin Maples and Jacqueline Allen Trimble. Then at 7:00 p.m. on Saturday, April 22, Kelly will be in the lineup for the Saturday Night Feature Reading at Cafe Istanbul, along with Rodrigo Toscano and Lee Herrick. (Kelly will also be on the faculty of the Saturday workshop at the New Orleans Youth Poetry Festival on April 22).

Cassie Pruyn will be part of the “Small Press Readings III” presentation at 3:30 p.m. on Saturday, April 22, in Cafe Istanbul, along with Sarah Anne Cox, Jeff Grieneisen, and Biljana D. Obradović.

Come out and celebrate poetry and small presses for the whole festival!

There have been a ton of great developments for the writers in the land of Peauxdunque over the last couple months, so before we get too far behind, here’s the news:

Peauxdunque writers have also aimed their pens at the current political times, with topical publications by Kelly Harris (“Resistance Must be Personal,” on after i was dead); Maurice Carlos Ruffin (“Talking in New Orleans in the Age of Trump,” a podcast republication of Maurice’s LitHub essay from last November, on the Racist Sandwich blog; and “The Effects of White Supremacy Are Non-Transferable,” on LitHub); and Alex Johnson (“Election Elegy 2016: A Carpenter’s Prayer on a Walnut Bed in the Woods,” on Flagpole), in addition to Tom Carson‘s regular cultural and political insights, which have moved from his old post at GQ to his new digs at Playboy (see, for example, his most recent essay, “Alternative Facts Will Rule the White House: Let’s Not Take the Bait“).

In other publication news, Maurice’s gentrification essay, “Transition in New Orleans,” has been published by Room 220; and his new critical take on Confederacy of Dunces, his essay “Ignatius in the New New Orleans,” was published by Louisiana Cultural Vistas. Also, Cassie Pruyn had her essay, “Report From the Field: Speaking Into Silences,” published at VIDA Review.

In awards-season news, the slightly old but huge news is that Maurice’s short story, “The Ones Who Don’t Say They Love You,” published in 2014 by The Iowa Review, made the list of 100 “Other Distinguished Short Stories” listed at the back of the 2016 Best American Short Stories, guest edited by Junot Diaz. Maurice also has two of his 2016 publications nominated for a Pushcart Prize, his short story “Children of New Orleans,” published in AGNI, and his essay, “Fine Dining in New Orleans.” His two Pushcart nominations join Tad Bartlett‘s nomination for his essay, “My Time With You,” published in 2016 by Chautauqua Literary Journal. AGNI also noted that Maurice’s essay, “Stanislavski in the Ghetto,” was one of its Top 5 blog posts for 2016. And, finally, L. Kasimu Harris‘s photography and writing work has been recognized with his naming as one of eight “Louisianians of the Year” by Louisiana Life.

Long one of our favorite poets (and now a member of Peauxdunque!), Kelly Harris will be featured by Larchmere Arts and the Nia Coffeehouse Poetry Series in Cleveland next Tuesday night, November 22. She will reunite with Vince Robinson & The Jazz Poets for a special show starting at 8 p.m.

Last week, LitHub ran a pre-election essay it commissioned from Maurice Carlos Ruffin, an incredible meditation on race, language, privilege, and political discourse, “Talking in New Orleans in the Age of Trump.”

Tad Bartlett learned over the weekend that his short story, “Anti-Heroically Yours,” will be published in January by Bird’s Thumb. He also found out that his non-fiction piece, “My Time With You,” which was published in June by Chautauqua Literary Journal, has been nominated for a Pushcart Prize. This is Tad’s second Pushcart nomination (his non-fiction piece, “Head Space,” was nominated last year by The Writing Disorder). 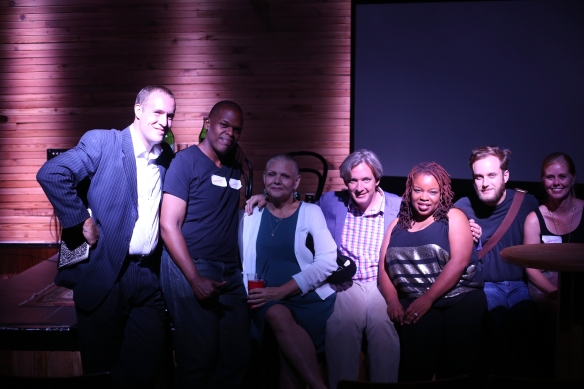 Peauxdunque shared a beautiful evening of love and generosity and art (so much wonderful art) with its founding member, Terri Sue Shrum, and with a large cross-section of the New Orleans writing and reading community on August 30, at Three Keys at the Ace Hotel. The event was our “Words for Terri Sue” benefit reading, to raise funds for Terri’s out-of-pocket cancer treatment expenses, and featured DJ’ing by DJ Sep (Giuseppe Catania); the New Orleans premier of Gian Smith‘s award-winning short film, “The Adulterer”; brilliant, touching, thought-provoking, and energetic readings by best-selling and award-winning writers M.O. Walsh, Kelly Harris, Bill Loehfelm, Nicholas Mainieri, and Maurice Carlos Ruffin; with the emcee duties handled with great spirit and skill by Nick Fox. The stage was also graced by Terri herself, with a tribute to all those who came out to make the night possible. We raised approximately $2,000 on the night, bringing our total fundraising for Terri over $11,000 in the past three months! And we’re not done, yet. Please visit our gofundme page for Terri, and keep your eye out for another fundraising effort in conjunction with the Words & Music Conference in November.

If you couldn’t make it (and even if you did), here’s a slideshow of photos taken by Peauxdunquian writer/photographer/renaissance-man, L. Kasimu Harris:

A couple of readings and performances by Peauxdunquians are coming up soon, and both should be well worth attending.

Tonight, The Megaphone Show Featuring Harry Shearer will feature impromptu story-telling from a cast including Peauxdunquian Helen Krieger. It will take place at The New Movement Theater at 1919 Burgundy, New Orleans, at 8:30. It will be a fundraiser for the Hell Yes Fest, and advance tickets are recommended.

This Saturday, July 14, Peauxdunquian L. Kasimu Harris (along with Friend of Peauxdunque Kelly Harris and several others from the MelaNated Writers Collective, including Ayanna Molina, Geryll Robinson, and Danielle Gilyot), will present works at the second installment of the MelaNated Summer Reading Series. At 4 p.m. on July 14 at Cafe Treme (1501 St. Philip Street – free admission), MelaNated puts on The Literary Jook Joint. Kasimu and fellow Peauxdunquian Ben Morris put together this teaser for the story Kasimu will be reading Saturday: